I’ve Got Munchies Episode: Takes A Bite Out Out Sugar Cone Surprises

On this episode of I’ve Got Munchies, Mary Jane discovers her DARE graduation old home movie and decides to 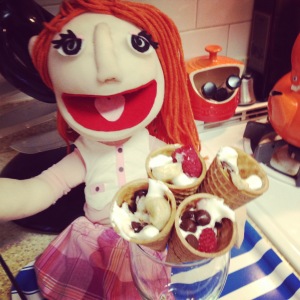 celebrate her 20th anniversary from her DARE graduation by making SUGAR CONE SURPRISES. Also featuring funny sketches: “We Squirm and Germ” by Squirm and Germ, “How To Enjoy Live Theater” by Jenneral Assembly, “Ricky’s Top 5 New Laws” by Sharon Jamilkowski, “Old PBR Commercial” by Brendan Mcloughlin, and “Snowmageddon” by Humor Me show.

These are great to make when camping or if you’ve run out of ice cream! Kids of all ages love them!
Print Recipe Pin Recipe