Takes A Bite Out Of Nutella Pops

Mary Jane is celebrating NY legalization of weed with a party and making M&M Nutella Popsicles!

Takes a Bite out of Ranch Crackers

Watch Mary Jane look into new investments with the help of her Mexican Lightbulb and make RANCH CRACKERS.

Takes a Bite out of Snickers Croissants

Watch Mary Jane get ready for a date with the help of her Mexican Lightbulb by making Snickers Snickers Croissants.

Watch PART 2 of  “The Joy Of Arting With Diana Ross” presented by  I’ve Got Munchies on MNN!

“The Joy Of Arting with Diana Ross” Show

PBS’s painting guru, Bob Ross had a daughter, Diana (yes, Diana Ross)**. After a successful career in art and her father’s passing, Diana’s chucking it all for her true passion. Join her for a revealing retrospective of her life’s work.

This originally premiered at SOLOCOM festival in 2014 as a mini show.

Written and Performed by Sharon Jamilkowski

Your favorite 1980s soundtrack songs re-imagined by a German überfan and a saxophone quartet at his birthday party. Come rock out with Manheim Tuttlingen, his Frauleins, and The Garden State Saxophone Quartet as they crank out his all-time favorite hits from Ferris Bueller’s Day Off, Back to The Future, The Goonies, Sixteen Candles, The Neverending Story and more. Filled with lederhosen-dropping surprises, a comedic character concert created/performed by Tim Girrbach (Squirm and Germ) and directed/choreographed by Wendy Seyb (The Pee Wee Herman Show on Broadway/HBO, Murder For Two, The Toxic Avenger Musical).

“It’s a little Jersey, a little German, and a little ‘80s – yes, you read that right. It’s your favorite ‘80s hits reinterpreted.” -Metro US

Jana & Lauren Presents is a monthly character showcase hosted by Jana Schmieding and Lauren Olson. Each month they host a rotating line up of badass NYC comedic actors performing new original characters. Consistently weird, wonderful, full of surprises and a lot of laughs. This show is not to be missed.

and of course,
Jana and Lauren

$7 and cheap beer and wine!

Get ready for 4/20 high holiday with this highlarious video from our pals the Papaya Brothers. They perfectly capture the “pain in the ass”ness of getting a new dealer. Bravo! This video is officially MUNCHIES APPROVED! 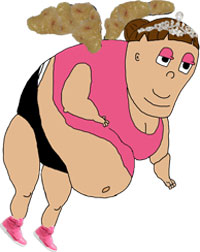