Takes a Bite out of Pizza Fries 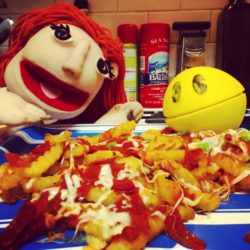 Mary Jane gets an eviction notice and needs to move, so she makes pizza fries to energize her to pack. Also featuring funny videos from: ABU Films, The Talent, Squirm and Germ, and Sharon Jamilkowski.