“I’ve Got Munchies” Turns 10 with a LIVE SHOW party!

Sharon Posted in Live Shows, Other

On June 21st, 2004 “I’ve Got Munchies” premiered on Manhattan Neighborhood Network! 10 years later, “I’ve Got Munchies” is bigger and better than ever with top New York City comedians and yummiest munchies recipes made by our stoner friend Mary Jane! We can’t wait to celebrate 10 years of success!

Where: Under St. Marks, NYC

Who:  Your Comedy Friends at I’ve Got Munchies

Oh and there’s a raffle for some sweet munchies gear and snacks! So come party, laugh, drink and even get some munchies with us!

Also on June 9th,2014 an ALL NEW 10th Anniversary episode of I’ve Got Munchies airs on Manhattan Neighborhood Network at 11pm (also released on Youtube and FREE on iTunes).

MUST See: (The Return Of) Birthday Sax

Check out BIRTHDAY SAX for a good time!!!

What if your favorite 1980s movie soundtracks were reinterpreted by Germany’s überfan at his birthday celebration? You’re in luck! This wonderfully energetic show RETURNS bigger and better than ever. Come boogie with Manheim, his Frauleins, and The Garden State Saxophone Quartet as they rock out to his all-time favorite songs. As Manheim would say, “Vhat ze hell are you vaiting for?! Let’s Pahrrty!”

This month we welcome some seriously ALL-STAR character comics…

One of my absolute favorite live comedy shows is the character driven show “Buttski & Glasscock’s New Talent Blow Out” at the Peoples Improv Theater from the brilliant and hilarious mind of Jenneral Assembly’s Jenn Dodd.

Check out the latest “Buttski & Glasscock’s New Talent Blow Out”:

Each month the Buttski and Glasscock Talent Agency brings you the best of the worst in the most pure, yet eccentric, talent this small town has to offer. As only two career-savvy former show girls can, Buttski and Glasscock comb through Craigslist ad after Craigslist ad looking to breed new talent. And each month YOU will determine which act will get a one-year contract with the agency.

This month Jenn Dodd will be hosting with Brendan McLoughlin (Williamsburg Film Festival, Comedy Rants) a SPECTACULAR-don’t-miss-can’t-miss-holy-shit kind of line up. We have:

What if your favorite 1980s movie soundtracks were reinterpreted by Germany’s überfan at his birthday celebration? You’re in luck! Come boogie with Manheim, his Frauleins, and The Garden State Saxophone Quartet as they rock out to his all-time favorite songs. As Manheim would say, “Vhat ze hell are you vaiting for?! Let’s Pahrrty!”

Check out the full lineup, read up on all the shows, receive other festival show recommendations right here:
http://www.arsnovanyc.com/antfest/

Check This Show Out- Buttski & Glasscock New Talent Blow Out!

This show is bound to be simply hilarious! A new show from the mind of Jenneral Assembly at the Peoples Improv Theater, this is one NOT to miss, filled with some of our favorite comedians (some you’ve seen on I’ve Got Munchies).

Who: Jenneral Assembly and her clan of oddball character comedians

Check out The PIT for more info!

Here’s a little taste of what’s to come…

If you missed the amazing new show “Identity Theft” from the brilliantly creative mind behind Jenneral Assembly, you should be really upset with yourself. On the 4th Thursday of every month,  Jenn Dodd creates a show filled with a diverse and hilarious group of people at Luca Lounge in NYC! The next show is August 25th at 7pm. Save the date!

On Saturday August 28th, 2010 at 9:30 pm at Ochi’s Lounge (Downstairs of Comix). The show featured a mixture of stand up, song, story telling and media. There was a drinking games and prizes for all. Special guests include: Kambri Crews, Jen Kwok, Geoff Schoenberg, MORT, a video from 3rd Wheel and MORE…

I’ve Got Munchies at Hempfest in Seattle

Sharon Posted in Live Shows, Other

Hempfest 2010 in Seattle, Washington on August 21st- Mary Jane visits Hempfest passing out I’ve Got Munchies Buttons and Pens- making friends and trading Munchies recipes. Special Rice Krispies Treats and brownies all around! Good Munchies times had by all on a beautiful sunny and 70s day! 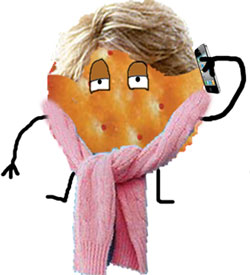